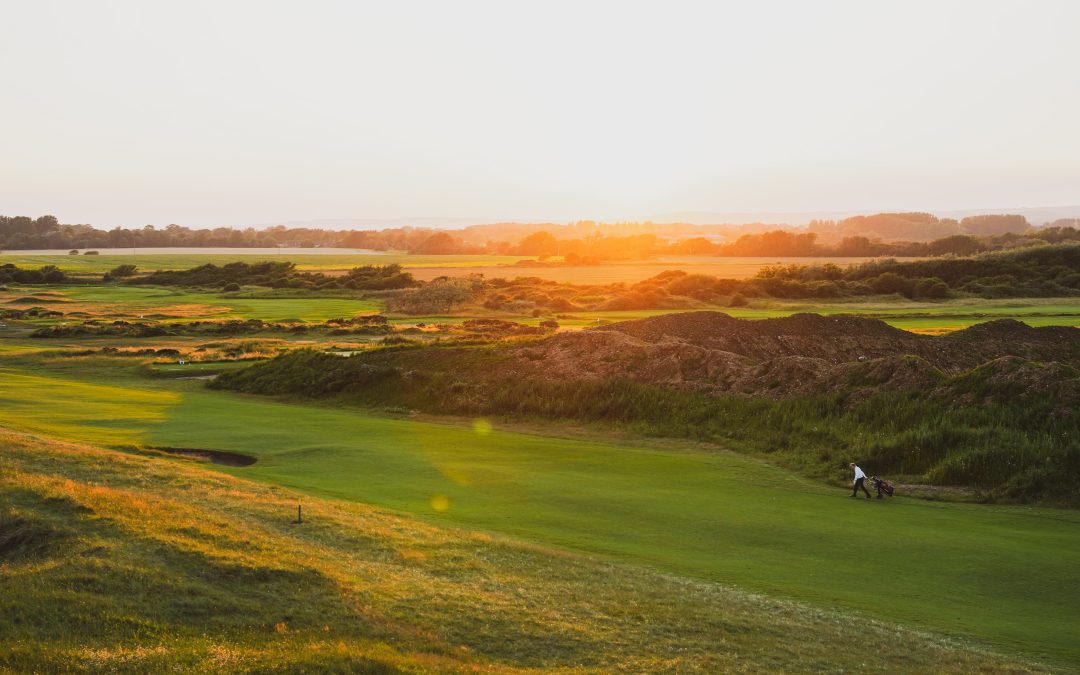 The word links has nothing to do with a link on a chain, but rather comes from the Old English word hlinc, meaning a dune or ridge. An archaic word for an archaic style of course. However, the links may seem a novelty to those golfers who have never played upon them. Links courses are almost always by the coast, where the dunes of packed sand covered with wild grass forms their signature wavy appearance.

Most links are in the UK and Ireland. However, a few have been replicated elsewhere, such as a few courses in Washington State in the United States and the Royal Adelaide in Australia.

Links courses were the first golf courses. The oldest golf course in the world is a links course – the Old Course at St. Andrews in Fife. The alterations that reduced it from a 22 hole course to an 18 hole course set the standard that courses still adhere to today. Links courses arose since the sandy, hilly land near the coast was unsuitable for farming and therefore open for other uses, such as sport.

In essence, all other golf course styles are an artificial replication of what nature forged on the Scottish coast with links courses. The primary greenskeepers at links courses are grazing animals that keep the iconic red and brown wild grasses at a manageable level.

The beauty of a linksland course often belies the grueling style of play required to play it. The uneven ground often causes balls to ricochet in unusual ways, and can make long shots very unpredictable. Not only is there very little margin for error, even satisfactory shots can sometimes go awry on the undulating dunes.  But even that seems irrelevant in the face of the true challenge of links courses. Howling headwinds coming in from the sea can throw a ball around very easily.

The result is that while other courses may give golfers room for creative and daring play, links courses are a test of will and discipline. The ball must be cast low to the ground at all times to avoid being intercepted by gusts of wind. To make things even more complex, traditional link courses have the first nine holes facing one direction and the other nine the other. This means that golfers will have to adjust to a completely inverted wind halfway through the course. Many golfers who try their clubs at the Open Championship – the oldest golf championship in the world which is entirely played on links courses – struggle to adapt to its harsh conditions.

But despite all of this, many golfers thrive on the chaos of the links. There are many unusual advantages that can be gleaned from the hard-packed earth. For example, hitting balls near the green so that they roll onto the green is common. If the wind is blowing forward, golfers may even risk hitting the ball high so it is propelled much further.

For many golfers, the Links have proven an acquired taste, and for none more than the legendary Bobby Jones. Jones was initially so off-put by his initial experience of the Old Course that he walked off after a disastrous 11 holes. However, over the course of his life he grew so familiar with it that he was made a Freeman of St. Andrews.

Jones would even say later that “I could take out of my life everything except my experiences at St. Andrews and still have a rich, full life”. He was not the first, nor the last, to be enraptured by the beauty and wildness of the seaside links.